The 6 Best Speakers for a Fender ’65 Deluxe Reverb Amplifier

This article will cover the six best replacement speakers for a Fender ’65 Deluxe Reverb reissue guitar amplifier.  Each of these speakers I have personally owned or tested and can highly recommend them for this guitar amplifier. Suppose you are new to changing speakers and have never done it before.

I highly suggest reading my article titled How to Choose a Guitar Amplifier Speaker.  These speakers will also suit the Fender ’68 Deluxe Reverb reissue amplifiers as well.  Each of the speakers in this list fits the criteria for trouble-free installation.

I have been lucky enough to own two Fender Deluxe Reverb amplifiers over the years and have also tested many of them for video reviews.  This list is the stand-out six best speakers I have ever tried for Deluxe Reverb. 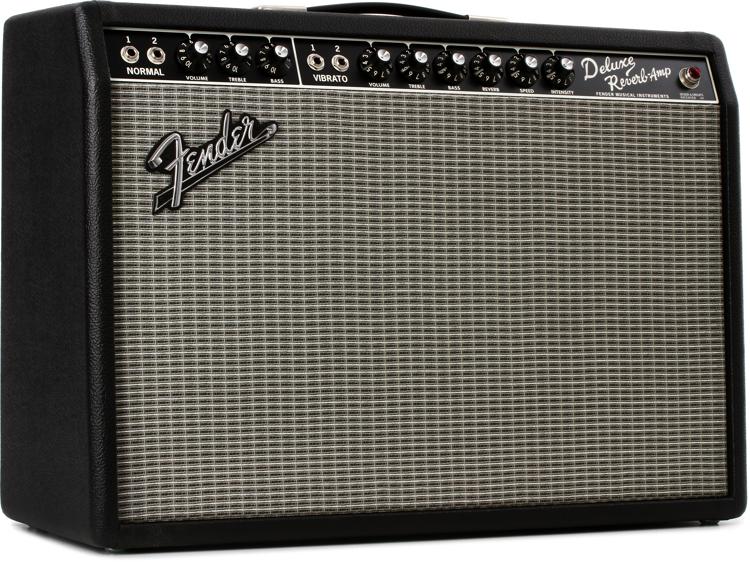 The Benefits of Replacing the Fender Deluxe Reverb Speaker

Please note that the Fender Deluxe Reverb is rated at 22-watts RMS, uses a 12″ speaker rated at 8ohm.  This list of the six best speakers for a Deluxe Reverb is my pick, and I always suggest listening to as many sound samples and tones as possible before buying one.

This speaker has a lot of clean headroom and has a sweet steely overtone that is perfect for a Deluxe. The bass response never gets excessive, which is why this speaker works well in a Deluxe Reverb.  The treble frequencies are 100% Fender.  The Celestion Redback keeps the chime of the Fender tone intact.

The only slight downside is the Celestion Redback G12H-150 will add extra weight to the amplifier.  This speaker comes in at 10.4lbs, so it’s not the lightest speaker in the World.  For those wanting to keep the weight down, I would suggest checking out my guide for the lightest guitar speakers on the planet. In my testing, the Celestion Redback G12H-150 is my favorite speaker for a Fender Deluxe Reverb amplifier.  While this is technically a “British” tone, you won’t find any of the ice-pick treble frequencies in the voicing of this speaker.

There’s almost nothing better than a great sounding speaker that also helps keep the weight down.  This Neo Creamback speaker from Celestion is a perfect match for any ’65 Fender Deluxe Reverb amplifier.  It’s not only light, but it’s also very efficient coming in at 97dB! Sure, 97dB isn’t the loudest speaker in the World, but it’s by no means the quietest either.

Fender released one of their ’68 Deluxe Reverb amplifiers with this speaker as a “Fender Special Run,” and after testing it, I loved it! Unlike the Celestion Redback listed above, the Neo Creamback only weighs 4.7lbs.  You have cut the weight of the speaker by half with this Neodymium magnet.

The Celestion G12 Neo Creamback speaker has its character.  I would consider this to be a very smooth speaker that works exceptionally well with overdrive pedals going into any Deluxe Reverb.  This Neo Creamback has more speaker distortion than the Redback, but it’s part of what makes it sound so great in a low headroom amplifier.

Does the Celestion G12 Neo Creamback sound different from the original Creamback? The answer is yes! Does it sound better? Not really, no, but it sounds fantastic in a Deluxe Reverb and is a great match.  You should choose the Neo Creamback over the Redback if weight is a concern or if you inherently like a smoother top end without the bright overtones.

The Eminence Swamp Thang is one of my favorite speakers of all-time.  The Swamp Thang is well suited to any Fender amplifier, and the Deluxe Reverb is no exception.  The Swamp thang will give you a much cleaner and louder tone than any of the options on this list.  Why is a high headroom clean tone important? If you want to push the amplifier up further, you won’t have issues with speaker distortion.

A lot of people think that because they hear distortion, it has to be the power tubes.  In many cases, it can be the speaker distorting.  This speaker cone distortion is highly sought after by some people and not by others.

Additionally, the Swamp Thing will give you a fuller low-frequency than any of the speakers on this list. This characteristic is one of the most efficient speakers on the market, which means it is deafening coming in at 102 dB.  With minimal speaker distortion, the Swamp thang will give you the authentic sound of the amplifier without the added speaker breakup. Unlike a lot of other speakers, the Swamp Thang will retain the high-frequencies and bell-like tones that Fender amplifiers are known for tone-wise. \

This one of the loudest speakers on the planet!  This popular Eminence speaker has that American tone is making it ideally suited to any Fender Amplifier.

Arguably, this speaker could be further up on the list.  Jensen speakers are made in Italy and will last forever.  The Jensen C12K is by far one of the most frequent speakers found loaded into the back of the ’65 Deluxe Reissue amplifiers. If you’ve been reading this post wondering what is wrong with the stock speaker, the answer is nothing at all.

The Jensen C12K has a distinctly American tone. The Jensen is a very balanced speaker.  Some people find them a little bit too bright in the higher frequencies, but not me. I think this is one of the best-suited speakers for any Deluxe Reverb amplifier.

If your amplifier has a Jensen C12K already installed, then there’s no reason to upgrade it unless you want something it doesn’t already have tone-wise. The Jensen C12K can handle up to 100-watts power and has a maximum SPL of 99dB, so it will be plenty loud for your beloved amplifier.  For owners of a ’68 Custom Deluxe Reverb, this is a great change from the stock Celestion A-Type Speaker.

I am putting this last on the list mostly because it’s not tonally my personal favorite and nor is it the best value.  If the Gold was the same price as the Neo Creamback or Swamp Thang, it might be further up the list.  Like anything tone-wise, it’s all personal choice and subject to your taste.

In terms of Character, the Alnico Gold has a very open and detailed sound.  The low-frequencies are never muddy or undefined.  The Celestion Alnico Gold has a “tighter” low-end than the Swamp thang but a similar high-frequency articulation to the Redback (listed above).

Even though this speaker looks large, it is a 50-watt speaker making it perfect for a Deluxe Reverb reissue or original.  This Celestion Gold is one of the few Celestion speakers that is made in England.  If that is important to you, the price is highly justified.

This great-sounding American voiced speaker can be pre-installed in many Fender Amplifiers.  Fender also released their ’68 Custom Deluxe Reverb with a Celestion A-Type speaker, and it’s a great match! Unlike a lot of Celestion speakers that lean towards the British sound, the A-Type would be at home in any American-voiced amp.

The first thing to love about this speaker is the price. It comes in at only $99 and has some of the roundest tones out there. For those looking for a classic American speaker without the price-tag, this is a great option.

The Celestion A-Type speaker can easily handle the 22-watts of the Deluxe Reverb.  You’ll also find these in other Fender amplifiers like the Hot Rod Deluxe IV that I think is the best it has ever sounded with any “stock speaker.”

While this is an inexpensive replacement speaker alternative, there is no compromise on tone.  Guitarists who like a lot of attitude in their Deluxe Reverb amplifiers will get a kick out of this high headroom speaker.

I hope this guide has been helpful.  In the end, it all comes down to personal choice and what you need precisely.  If you are replacing a faulty speaker, you will be happy with any of the speakers on this list. If you are thinking of swapping out the stock speaker for something else, then these speakers will sound very different from the stock Jensen.

How to change the speaker in a Fender ’65 Deluxe Reverb

This video below shows exactly how to change the speaker.  If you have the right tools there is no reason to remove the baffle, but if it’s easier you can do it that way.